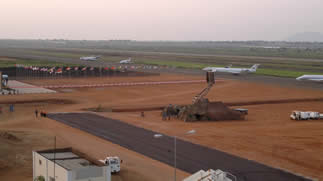 As part of the independence celebrations, the South African government deployed a military contingent to Juba in South Sudan, Africa’s newest state.

The purpose was to provide radar coverage for the airfield and the necessary airspace control for all the visiting heads of states and other VIP’s at the airport. A SANDF Air Defence Artillery Formation Thutlwa Radar System was deployed at Juba airport to support the SA Air Force in providing radar coverage of the airfield for Airspace Management / Air Traffic control functionality.

After travelling more than 500km by road from Kimberley to Pretoria the Thutlwa system was loaded on board an Ilyushin II-76 cargo aircraft which flew another 5000km to Juba. The Thutlwa system was off-loaded and deployed and was declared operational the same day with an air picture via the Air Picture Display System to the air traffic controllers.

This heralded the first ever deployment of a Reutech Thutlwa Radar System beyond the borders of South Africa and only the third ever operational deployment in an operatiopn other than war mission of the system. The first being the 2010 Soccer World Cup and the second was in an Air Border safeguarding operation earlier this year.