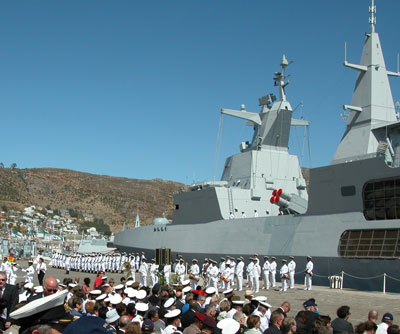 The Official handing over ceremony and commissioning parade of the First-Of-Class vessel SAS Amatola took place in Simonstown, South Africa on 16 February 2006.

These ships are of the most advanced warships in the world today. Featuring a stealth design, SAS Amatola combines a number of world-first propulsion technologies with an innovative and largely South African combat system, including locally designed combat management, communications, electronic warfare, tracking radar, electro-optic, missile and gun systems from more than 20 South African high-tech companies, making the ship a show-case of SA engineering ingenuity and skill.

RRS' contribution to this major event is the successful sea qualification and hand-over of the RTS 6400, a high-performance monopulse X-band combined optronics and radar tracking system, which performs a pivotal role in the self-defence of the corvette.

It is a major milestone for RRS, being the first South African Radar Tracking System to have been fully commissioned into the SA Navy.